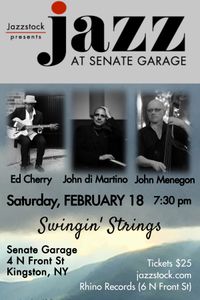 ED CHERRY (guitar) Cherry was Dizzy Gillespie's guitarist from 1978 to 1992!!! More recently, Ed has just returned from an extensive European tour with his TRIO featuring pianist John di Martino. An expressive instrumentalist, Cherry has a hip, melodic approach that is a refreshing contrast to guitarists who frequently resort to playing finger music -- the execution of rapid streams of notes, that serve no musical purpose other than to fill space. Jim Ferguson, JAZZTIMES

JOHN di MARTINO (piano) di Martino is a Jazz pianist, composer, arranger, producer and educator based in New York City. He is described as a "shapeshifter" for his creativity across musical genres. John di Martino is one of my absolute personal favorite pianists of today. His music is an honest outpouring of light. BENNY GREEN, Jazz Pianist

JOHN MENEGON (bass) Menegon's 10 years spent with Tenor Saxophonists David "Fathead" Newman and Dewey Redman set him on his path to become a bandleader and composer. Besides leading his own bands, he is an in-demand sideman working with the likes of Joe Lovano. Canadian-bred John Menegon is in the line of George Mraz and Michael Moore; a harmonically sophisticated bassist with technical facility who swings hard when it’s called for. Kirk Silsbee, DOWNBEAT